Tim Tebow Goes for the Conversion 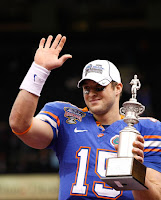 “Grind on me, test me,” Tim Tebow recently told Sports Illustrated’s Peter King. “I feel I’ve prepared my whole life for this.” He was talking about the Senior Bowl in Mobile, Ala., where Tebow’s been huffing his way through brutal workouts before an audience of NFL scouts. The University of Florida quarterback could have just as easily been talking about his upcoming Super Bowl commercial. At a press conference last week, Tebow said that he’s “always been very convicted” about the wrongness of abortion “because that’s the reason I’m here.” Jason Fagone reported this week on Tebow’s ultimate goal. “What is the end? It’s not just stopping abortions. Tebow wants to convert people, like his father does in Muslim areas of the Philippines. Until now, he’s been subtle in his outreach, pushing his message gently, painting “PHIL 4:13” and “JOHN 3:16” and “MARK 8:36″ in his eye black—an ingenious touch that prods even the most degenerate couch potato into Googling Bible verses out of curiosity.”

Do you think Tebow understands there is no fear in Christ? Why or why not? For more on this topic, check out this week’s Sports In Focus study here. Also, for more discussion on Tim Tebow’s Super Bowl ad, click here and here for articles written about his Super Bowl ad.