Nebraska FCA’s Husker Tour made the rounds on February 19th. Husker athletes Bo Kitrell, Lane Hovey, Jake Weinmaster, Ty Betka, Joel Sneed, Zack Darlington, and Aaron Wong traveled to Schuyler and Columbus to testify to the work of God in their lives and share Jesus Christ’s love with all attending. These athletes excitedly volunteered their time and their personal stories to maximize the God-given platform of sports to share the good news of Jesus Christ.

The first stop was Schuyler Middle School where Bo Kitrell, Lane Hovey, Jake Weinmaster, and Ty Betka shared their stories of coming to faith in Jesus as Lord and Savior, of finding their identity and contentment in Christ as opposed to friends and fans, and the gospel story of how they too could be saved from the wages of sin. The Schuyler students had a great time playing basketball with the Huskers and hearing them tell their stories.

The journey for the Huskers continued to Columbus Lakeview where parents, fans, and athletes streamed in following a victory over Central City to close the regular season. At the Lakeview Husker Tour, Lane Hovey, Joel Sneed, Zack Darlington, and Aaron Wong told an attentive audience of recovery from scornful fans, parallels between golf and a life of faith, encouragement to listen to the voice of truth, and the good news of how to be saved from separation from God. Those attending responded positively to the messages, stories, and Husker athletes. The night ended with a few competitive games of knockout. 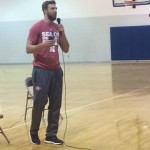 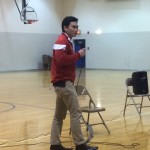 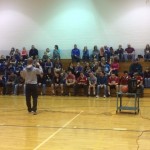 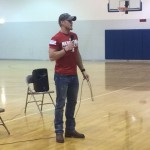 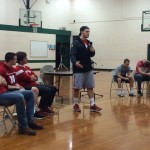 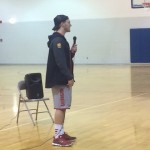 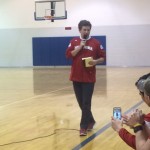 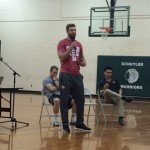