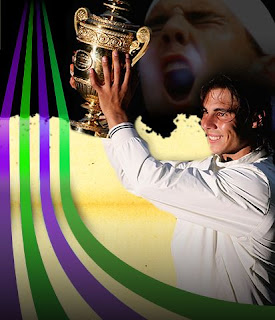 Yesterday Rafael Nadal won what is arguably the most prized crown in the tennis world; the Wimbledon trophy. His battle with Roger Federer is being called one of (if not THE) greatest matches of all-time. The match was 4 hours and 48 minutes long and left both competitors exhausted.

But beyond the physical and mental exertion of this particular match lies the incredible preparation on the part of both men BEFORE this match. Each competitor went into strict training – the likes of which most of us will never know. But for what? To be the best? To win the trophy? To gain the applause and accompanying fame and adulation? To win the prize money associated with the championship?

The apostle Paul writes in 1 Corinthians 9:24,25 that these things are all crowns that will not last – they are perishing wreaths. Winning for the Christian DOES NOT find its definition in the perishable. We SHOULD go into strict training. We SHOULD give everything we’ve got to max out our God-given talent. We SHOULD strive to win. But our definition of winning finds its heart in the gospel and our prize is something infinitely more valuable than the temporary stuff of this earth.

Paul in verse 23 tell us, “I do all this for the sake of the gospel, that I may share in its blessings.” That’s it! His prize is the gospel as both motivation and reward. Winning Wimbledon certainly would be an exciting and happy moment, but nevertheless short-lived. For the Christian who is doing sports God’s way, to point to the gospel as the highest reason and greatest reward (my utmost for His highest) – now that’s an imperishable crown! Anything less is a motive from pride and a reward that is idolatry of the highest order!