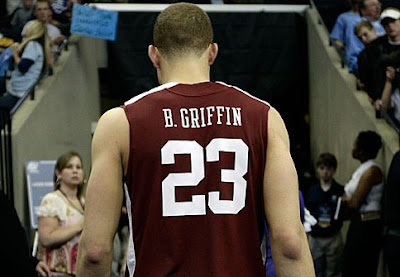 Even in defeat, Blake Griffin had few doubters that he is the best basketball player in college. After Oklahoma’s loss to North Carolina in the South Regional NCAA tournament, many fans and reporters wondered if they had seen the last of him. His sophomore season ended with a 23-point, 16 rebound game leading to speculation that he will likely turn pro next year after making his mark on the NCAA this year. When his coach was asked if his 6-foot-10 star player’s college career was over, Sooner coach Jeff Chapel said, “It probably is, but we’ll see.”

What’s true in sports, is also true spiritually. There are certain characteristics or fruit as described in the “fruits of the Spirit” that mark a person’s spiritual life (Galatians 5:22-23). Click here for this week’s Doing Sports God’s Way lesson on the “Marks of a Committed Christian.”

Blake Griffin’s involvement with FCA…
“I first started going to FCA when I was a freshman (in high school) at Oklahoma Christian School. I was actually one of the class officers as a freshman, and that’s really when I first started going. Throughout high school and throughout college I’ve gone. I haven’t gone as much since I’ve been here just because my schedule hasn’t really allowed it sometimes, but I’ve been a Christian my whole life, been in the church my whole life. I was saved when I was 6, and I go to Life Church now.”