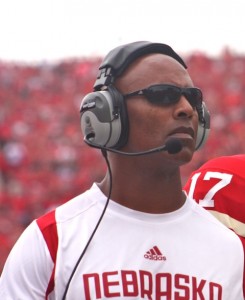 Twenty-eight years is a long time. Just ask Ron Brown who recently ended his coaching relationship with the University of Nebraska after 24 years. Between coaching stints under Tom Osborne, Frank Solich and Bo Pelini, he also served four years as the state director for the Nebraska Fellowship of Christian Athletes. Most recently he coached running backs and will continue to do so at Youngstown State where he will also be the associate head coach.

It’s never easy to leave a place that was your mission field. That’s the way Ron Brown felt from the day he arrived in Nebraska. In fact, I remember Ron saying as much all those years ago when we first met. I was serving as the area representative in Central and Western Nebraska for FCA. We were the same age and had both played college football. We also shared the same passion to reach the state of Nebraska with the gospel using the platform of sports.

I always felt privileged to introduce him each spring to so many Husker fans around the state as we traveled to his speaking engagements. He especially loved driving through the sandhills and listening to fans talk about everything from milking cows to castrating bulls. On one day, I even scheduled him to speak at six different places and nearly killed him! He still gives me a hard time about that! His boldness to share the gospel throughout the state never wavered for a single moment during the past 28 years. He understood the opportunity God had given him to use his platform as a Husker football coach in a football-crazed state to tell people about Jesus.

Think about it. How many college coaches would give up the only time they have away from the gridiron to speak at high schools and churches in towns that have more cattle than people? For a guy who grew up on an east coast Island, it was an especially odd pairing. After introducing him to speak at an FCA group in Broken Bow, I still remember him telling the audience how pleased he was to be in their town as his pronunciation was the bow of a ship rather than an Indian bow and arrow. I heard more than once about how there was nothing like the fresh seafood he grew up eating on Martha’s Vineyard.

But he rarely spent time talking about the past. Most of the time, he would strategize how he could reach more people with the gospel. He spoke several hundred times (if not thousands) over the years.  He also co-founded a statewide Christian radio network, a camp for youth, a men’s ministry, wrote several books and hosted a national radio program.

He was considered a lightning rod when stating his biblical positions which often upset a culture that has become increasingly secular during the past 28 years. He was cheered for demonstrating his faith on the field in 2011 when he led a prayer at Penn State following the aftermath of the child sex abuse claims against Jerry Sandusky, but he was booed by many when he attended an Omaha City Council  hearing to oppose a law that supported homosexuality. He later told me that he had gone from hero to goat within just a few months.

No doubt Nebraska’s loss will be Ohio’s gain. He’s already scheduled to speak at the Ohio Football Coaches Clinic in Columbus next month when FCA hosts a breakfast for the hundreds of football coaches who will be introduced to this passion-filled coach. As much as I will miss my friend, I’m sure the state of Nebraska will miss him more. Mike Bliss, who lives in Omaha and served with him in ministry, put it best, “Ron Brown has been a treasure to the state of Nebraska. Now it’s time for us to share him with others.”

Ron is scheduled for several return visits and will speak at the Iron Sharpens Iron Conference and Westwood Church in Omaha on February 21. He’s also planning to speak at the Nebraska Christian Schools’ graduation on May 9. You can follow Coach Brown’s regular columns in the FCA magazine at www.fca.org. He will continue adding more video studies for coaches and athletes at www.calledtocompete.com.

Gordon has served on staff with the Nebraska FCA since 1986. He played for the Nebraska football team in the ‘70s and later attended Talbot Seminary. He founded Cross Training Publishing which equips sports ministries to evangelize and disciple athletes and coaches. He is married to his wife Terri and has four grown children.

Click here to assign a widget to this area.